The location where a sensor is placed is critical in the function of a good heat trace system. Contractors or installers seldom own the facility where they install a system. If they did own it, they might stop and think a little more often about where the actual best place to install a sensor would be when they built the heat trace system, wouldn’t they?

The best place to have a sensor is always where temperature is most critical. Heat trace circuits can be anywhere from ten feet to hundreds of feet long. But where along any given run is the most important place for the content of that pipe to be at temperature? First, let’s define two important terms: line sensing and ambient sensing.

What is line sensing?

Line sensing is when temperature sensors are located on the surface of the product being controlled.

What is ambient sensing?

Both ambient sensing and line sensing have their advantages and disadvantages. Let’s take a deeper look to see which type of temperature measurement sensor system would work best for your application.

Ambient sensing applications tend to be freeze protection applications. Having a sensor outside that can tell when temperatures are close to freezing signals the heat trace system to apply power to the individual circuits to begin heating, preventing the contents of that pipe or vessel from freezing. Normally there is just one sensor for the entire system. You could have one sensor telling dozens of circuits to come on all at once. These are very simple control systems, and can be very effective if installed properly.

So what could go wrong with ambient controlled systems?  Here are few things to consider:

What is line sensing?

Line sensing heat trace systems have the sensor placed on the surface of the system needing to be maintained. It is common for multiple pipes or vessels on the same heat trace control system to have many circuits with each individual line having its own different required control temperature.

Just as with ambient temperature sensing systems, where line sensors are placed is vital in the performance of the system. Engineering drawings will often have the sensors placed randomly with no consideration of that sensor location. Contractors often place sensors where it’s convenient to locate them (for example, in close proximity to a power drop). While it’s convenient to run conduit and power wires and “drop” to equipment requiring that power, locating a sensor at that same location is not always the most optimal location for a process

For piping, attaching the sensor to the pipe mechanically is key to long term reliability. An RTD like this

attaches to the pipe surface with a pipe clamp, and then is insulated over.

Many clients prefer to measure the temperature at the end of a piping run so that it is at the proper temperature once it reaches its destination. There are systems available that can measure temperature at multiple locations along a run if this is required. Placing multiple RTD’s or Thermocouples along that pipe run, as well as having a controller that can monitor temperature, manage data and make a decision for heat output, would also be needed.

For vessels, consider if it is a horizontal or vertical tank. Heat rises, so it is common to have more electric heat trace on the bottom runs than on the top. Stacking your sensors perpendicular to the ground so that the zones can turn on and off as the heat rises would be much more effective. Make sure that the sensor is touching the surface of the tank. Banding clamps are often used to fix the sensor in place, and in some cases mechanical attachments are also used. You want to be touching the surface of that vessel since you are depending on it to transfer the heat to the product in the tank.

Line sensing in valves and pumps

It’s also important to consider critical pumps and valves in a line sensing application. If you have a valve or pump that is going to require more service than anything else on that individual heat trace circuit, think about making some modifications.

There is a strong argument that all applications should be line sensing. Think about a freeze protection system for piping as an example. If it is 35F outside, and the pipe under the insulation is still at 45F, you have 12 degrees to go before it freezes. Line sensing is much more effective and probably a better use of electricity as well. This type of system requires a more complex control system, but the savings in electricity over time on a large system would quickly pay for itself. Turning things on at 45F isn’t a bad idea if you live in a consistently cold climate.

Call the line sensing experts at Powerblanket today and let’s visit your system. We would be glad to help in any way to create a custom heat plan and get your freeze protection system operating efficiently.

Don't let the cold weather stop your business. Powertrace heat trace cable will keep you running smoothly no matter how low the temperatures.


4 Tips to Beat Frozen Pipes Cold bites. And, nothing bites worse than frozen pipes. So, if you’re sick of...


Storage tanks are used for many different purposes, from large water tanks, to portable frac tanks, to small propane tanks.... 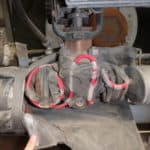 
In early 2021, Texas was hit hard by an energy crisis that rattled its core infrastructure and left many of...